Feels like ages since I started this blog. The first post was written in July of 2006. Phew, 11 years ago. Time flies.

Back then, I worked for Sony Ericsson, making platform plans for web and Java in the mobile phones. The iPhone was still not out, Facebook was a tiny social network and Android was still a singer in an obscure Swedish electronics band. So much has changed. Yet, so much is still the same.

Currently, I work as a consultant in a company I co-founded called Lean Forward and in many ways it’s the natural continuation of this blog. I used to call it “agile business development” and many posts on this blog touch on that subject. I didn’t have a clear picture of what it was (I probably still don’t) but it’s what happens when you merge agile product development with innovation and digitalization and then add a flavour of purpose to it. The concept of growth is critical, but not just growth in revenue and profit. I find this post from 2009 on the same subject:

Growing a business is also about growing the individuals working with that business.

This. We need to “level up” our understanding of what a company is and does and that is what we try to achieve with Lean Forward.

Most of my posts these days end up on Medium, so you can find them here. 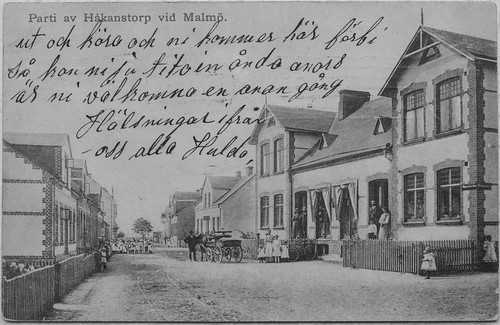 A photo from 1910 on the street our house is (the one left to the man with the horse).

It’s been quiet on this blog for quite some time. I was supposed to write one blog post per day but that didn’t last long and now the blog has been silent for almost two years. Funny how time flies, isn’t it.

It’s been two very hectic years for me, personally. I’ve gotten married to my girlfriend (finally), bought a house, we just got our second daughter, I’ve started three companies and one cooperative company and I’ve gone through all the usual ups and downs of being an entrepreneur with one minute you’re feeling like the king of the world and next you’re wondering what the heck you’re doing.

Right now I’m focusing all my attention on my family and the company I run, Startup Studio. I’m learning new stuff every day from both of them which puts me in a very fortunate position. But it means that most of the blogging I do, especially about startups and related stuff, will be on our corporate blog. Perhaps I’m going to write more personal stuff on this blog. We’ll see…

Is it because we’re trained and educated in to a different way of thinking or are they inherently hard?

This post from Derek Sivers C Dixon got me thinking. From the first day of school we are trained to think in a certain way. Essentially, we’re all managers or at least that’s what we’re expected to become.

Be a part of the machinery. Optimise it, tweak it, but don’t disrupt it! That’s what school teaches you.

But we know that entrepreneurship is different. Steve Blank, Eric Ries and the rest of the lean startup movement have taught us that a startup is a completely different beast than a company with an established business model and product.

Instead of optimising you should be experimenting.

Instead of tweaking you should be pivoting when the experiments fail.

And disruption is on top of the agenda.

With the lean startup process we now have the manual (sort of) for doing it. But it’s still so darn hard. The manager within us keeps holding us back.

So, I wonder: are startups hard because we have to fight the instinctive urges that one and a half decade of management thinking training (aka “school”) has programmed us with or are they hard because, well, it’s simply hard? What do you think?

Even though the winter winds of February has a tight grip on the Nordics, summer is getting closer and closer. My goal is to be ready for launch with my side project before the summer. It’s frustrating not being able to work full time on it, but I don’t want to repeat the mistakes I’ve done in the past and not have enough of a buffer before starting.

I started with the #blogg100 (one blog post a day) two weeks ago and for some strange reason I actually started another project at the same time: a change of diet (low carb, high fat). These two will both run until summer, I hope.

So that’s my goals for the spring:

So far I’ve lost about 3 kg and I’m on my 15th blog post. I’m writing code for my side project almost daily so moving forward there as well. Let’s revisit this in a few weeks and see where I stand. “You have one of the top 1% most viewed LinkedIn profiles for 2012. You are a unique and beautiful snowflake.”

OK, I added that last part myself. But LinkedIn sure do know how to stroke your ego. I’m sure a lot of you received a similar mail today.

Problem is, I’m just thinking how this means 99% of LinkedIn users are even more passive than me. Oh, well.

Online shopping is growing at a rapid pace here in Sweden. At the same time we’re seeing strong competiton amongst shopping malls, all fighting for the same customers. Where I live, in Malmö in southern Sweden, more than 300 new stores have opened in about a year, with the mighty Emporia as the main growth factor.

Problem is of course that the customers are moving over to the internet. With 15-20% yearly growth of online shopping, you don’t have to gaze too far in to the future to see a major chunk of the consumer money going from the stores in the malls to the web.

So what happens to the store as we know it?

One idea I’ve been toying around with for some time is the inner city showroom. A place where you can test, touch and try things but not actually buy them. More like an exhibition than a shop. Of course there would be internet terminals in the room where you could buy, from associated online shops, but you wouldn’t be able to buy stuff over the counter.

How does this place make money? It could charge money from the online stores, either as a sort of rent for their products to be shown or as an affiliate when people buy things. It could even charge the visitors. After all, people pay to visit exhibitions.

Don’t know if it would work but I think it’s high times for anyone working with physical stores to consider their future in a world where most of the consumers money is spent online.

What do you think? Is it a feasible idea? Perhaps it’s already been tried somewhere?


It’s never a straight path. Get used to it.

While working in an established business certainly can be a challenge sometimes, I don’t think it compares to the constant uncertainty of a startup.

There are just so many open ended questions that keep popping up. Let’s just try and list a few from an early stage startup project.

What idea should I focus on? Can or should I do more than one startup project at once? What co-founders do I need? Should I look for outside investments? Should I take a bank loan? Should I quit my job? Should I try and do a high risk/high reward startup or a lower risk/lower reward lifestyle business (the difference can be nothing more than the amount of marketing dollar you have)? What markets should I target? Do I need a mobile app if I have a web site? Do I need a web site if I have a mobile app? How should I price my product? How should I receive payments? What cloud platform (if any) should I use? What technical platform is best suited for my product? Should I hire someone? What should I name my startup? Do I really need a .com domain?

Phew. I can go on like this for a long time. And this is just from the very beginning of the startup. No wonder so many people gets stuck and never take the plunge to get started.

The post about speed paradigm got me thinking about how a company changes over time.
Entrepreneurship research speeks of three main character types needed in different phases of a company’s life:

Going through the different stages:

Looking at this: what stage is your company in? Do you have the right people at the top?

A little surprised to see Everyblock close the door. Everyblock was a site in the superlocal category, focused on neighborhood news. I am myself working on a side project in the same area so I’m following this with interest. Hopefully they’ll write a full post mortem.